Warning. This is about poop. If you don't want to read about baby poop then stop. now. or when I mention to stop again.

There is a lot of back story here but I am going to try and give the quick version. Last Tuesday we thought we would try and introduce some food to Sonny. I know he isn't 6 months yet and in an ideal world I would not have had to start so early (one week shy of 5) - but in an out-of-breast milk-emergency home made baby food is going to be my back up]. I bought some organic baby yams from Fresh Direct and whipped up a tasty little concoction of pureed baked yams, breast milk and water. Sonny LOVED it (another blog post to come with pictures - and maybe video). He couldn't get it into his mouth fast enough. Ok, now fast forward to Saturday. Sonny still had not pooped. Granted it is totally normal for breastfed babies to go a few days without pooping, but not Sonny. He pooped like clockwork. So you can imagine how weird it was that it had been 4 days. He finally pooped. a tiny bit. Here is where you should stop if you don't want to see baby poop.

There were these little "things" in his poo. Weird little red/brown squiggles. Reminded me of saffron. Here is a picture: 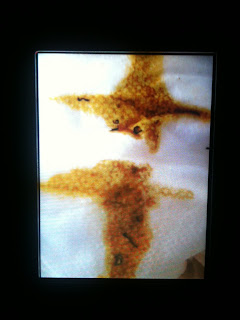 A little alarming right? We decided to wait until the next poo to see if there were more. Fast forward again to Sunday afternoon. Still no poop. About to intervene when Sonny smiled real big and scrunchy and pooped a giant poop. In that poop there were a lot more squiggles. This is where I start to panic a little thinking Sonny has worms and how terrible that must be and how could such a thing happen?! I should never have given him those yams! Blasted Yams! I Hate you!

My friend/ one of Sonny's sitters came by to drop off some essential oils for his constipation and took at look at the "worms". She confirmed what I already knew - it wasn't yam fibers. We tried to think of everything it could be she casually mentioned that on Thursday he grabbed a piece of banana she was eating, but didn't think he even ate much.

After a little internet research and thanks to many other panicked mothers of banana fed babies, we learned two things: 1) Banana's constipate babies 2) Baby banana poop looks like worm poop. SONNY  DOES NOT HAVE WORMS. Here is a Zoomed in picture of the "worm": 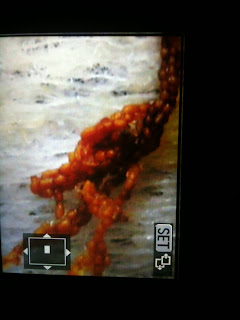 Gross right?
So much for keeping this short. I could have just said:

When you feed a baby bananas don't be alarmed if their poop looks like worms. It's normal.
Posted by Ylrac at 9:57 PM