FRIDAY
I had things to write about over the weekend but i never did. Friday night my friend Katie Finn - who designed and made my awesome wedding ring set:

was having a trunk show at this awesome little store in the West Village: Castor & Pollux (the people who own this store are the best- such good people). It was really cool to see so many of her pieces in one place. Everything Katie makes is beautiful. Everything. There was not one thing there that I didn't want to buy. You can check out Katie's website and follow the link to her blog. She recycles gold and so she is a considered a GREEN designer.

Katie's friend Dara was there helping out and it turns out she's also a jewelry designer. She engraves really neat organic type designs into lucite and then paints the background and foreground. She happened to have a few samples with her and I really liked them all. This is what they look like Dhara Design. I bought one but it's not on the website. It's blue with white cat tails/wheat looking things. Best part is they are really reasonably priced. After the show we went to a great little eatery down the block called Westville. Josh and I both got the vegetable plate and they had so many choices we didn't even have to get any of the same stuff- except the tofu. 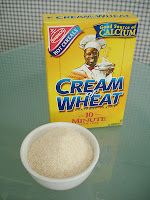 (my Mom's breakfast cereal of choice) or

(my Dad's breakfast cereal of choice). I bought both because I can never make up my mind about stuff like that. If you are going to make Cream of Wheat this is what you have to do:
Add Brown Sugar
Add Cinnamon
Add More Brown Sugar
Add More Cinnamon
Add Raisins (maybe- if you are feeling it)
This should be served in a shallow bowl and once you have it served take a little milk and pour it around the sides, kinda like a moat. It's sooo good. If you decide to make Wheatena, then this is what you have to do:
Add Butter
Add Salt
Add More Butter
Add More Salt
Add imitation bacon bits (this is optional)
You can serve this is a bowl or a plate. But once it is plated, you should flop a slab of butter right in the middle, this makes for a good presentation.

I went with Wheatena in the end. I was not sorry.

Ok, so josh has this friend who is a make-up artist and he's a really good make-up artist. He usually does all the make-up for josh's shoots. Well he is also a drag queen and a "mother". And I'm not sure how it works, but something like a Drag family? According to Wikipedia: Houses", also called "drag houses" or "drag families", are groups composed primarily of gay males and transgender people, the majority of which are African American or Latino, banded together under a respected "house mother" (sometimes a drag queen or a transgender person, but not always) or even a "house father". So there you have it. They are a family and the mother guides the children in all the ways of the world.

So this friend of josh's wanted a Family Portrait (maybe I should post one on Awkward Family Photos). It was supposed to start at 11am they didn't start trickling in until 12ish and then they started hair, make-up and wardrobe. Apparently it is a long process to transform into another group of people because they weren't ready to shoot until 4:30ish. In the end there was the mother, two "daughters" and three "sons". The sons didn't have to do anything special, just a little eyeliner. It was really funny. But not LOL funny, because that would have been rude. More like, "haha, there is a drag family in my living room right now, and they are all acting like Diva's" funny. Good Times. I tried to be nonchalant with my picture taking, so this is the best I could do without it being obvious that I was taking pictures and not just looking through my phone: 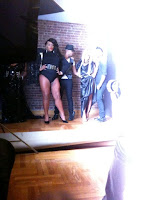 Sunday
Super Bowl! Did you know I was born on Super Bowl Sunday? I was. January 25th 1981 (Raiders vs. Eagles) Raiders won. We were invited to our friends party, and I was making cookies to take and just as I was about to add the eggs, i realized we were out. I went across the hall to ask to borrow two eggs but the guy didn't have any. But he did have a funny question: "What was up with all those Drag Queens at your house yesterday?" Wouldn't he like to know.

I didn't win the work Super Bowl pool. Other than that there is nothing else about that day worth recording.


Now we are in Barcelona for a quick vacation. Next post will be all about that.
Posted by Ylrac at 1:17 PM