Mainly due to the Olympics going on right now Canada seems to be everywhere. Well some people don't like Canada. I know someone who won't even call it by its proper name. They will only refer to it as "America's Hat". Some American's don't like that they club seals. Some American's are jealous of their safeness, clean air, health care or many other neat things. Maybe some people hate it because of blogs like this . Maybe others like to laugh at the way they say SOOORY. I know when I was a kid and watched Welcome Freshman, I used to think they sounded ridiculous. I'm sure it also doesn't help that the United States beloved Stephen Colbert loves to poke fun and spar with them regarding speed skating. Whatever the reasons- justified or not- we have to be ok with the fact that Canada isn't going anywhere, and technically they are on top.

I haven't had many encounters with Canadians, but I would like to share an experience I recently had. In Barcelona there is a place called Montjuic. In most occasions if you wanted to go to the top you would take a little tram that whisks you away to the top and you can bypass the hike and the gardens. Well, since February is off season they decided that they would do repairs, therefore, it was closed and we had to either walk up or take a bus. We decided we would walk. When we got to the point that seemed like a good starting spot (the bottom of the curvy road) 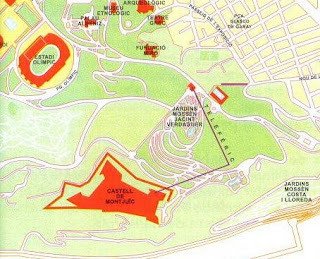 we saw two young men also holding a map and trying to decided which way to go. They were speaking English so we started to talk to them, had about a 10 minute conversation. Turns out they are Canadian. We say good bye and separate on our quest to reach the top. We get to the top of the trail and there is a fence separating us, a road and the fort (our final destination). We see the Canadians looking puzzled as well and they tell us that they are going to walk back down and try a different route (Canadians = polite and law abiding) we decide to jump the fence (Americans = reckless and lawless). 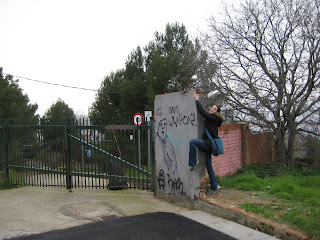 While enjoying the views and the history of the old fort and prison (at this point we have reached our destination)I see a cannon that who wouldn't want to climb and sit on: 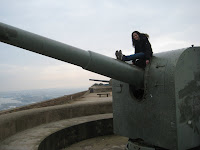 Now from this vantage point I can see two young men approaching (the Canadians) and josh also sees them. Between snapping shots of me on the cannon he turns to them and says "So you made it". The one looks very confused and shakes his head. Josh says again "So you guys made it". The guy shakes his head again and says "I'm sorry, I don't speak Spanish"!!!!!!!!!!!!!!! Neither does josh. josh speaks English. Only English. Josh's eyes go kinda big- kinda like when you don't want to bust out laughing- and he turns back towards me. and says "O.K."
Finally, that Canadian realizes he knows josh, apologizes and blames the long hike.
Sigh... Oh Canada! 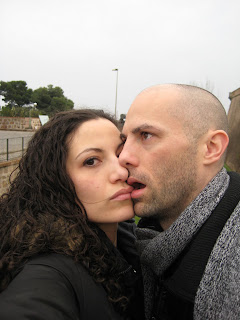