For the Little Ones 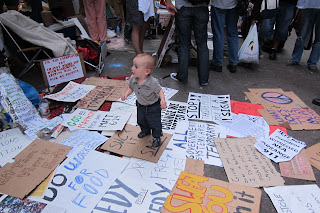 I am stepping onto a soap box right now, but only for a minute.

Like Kanye West, I had been wanting to Occupy Wall Street, even if it was only for 30 minutes.  I live in NY, I'm disappointed in our government, I'm disappointed in our economy, I'm embarrassed by our greed and our corruption. I do have a job though, and for that I am grateful.   Am I not "Un-American" as Presidential hopeful Herman Cain suggests. Nor do I think that the protests are "dangerous" as the mulit-millionaire (Wall St. poster boy) Mitt Romeny claim.  In fact, I am very much American.  Thomas Jefferson and Benjamin Franklin were very American and very outspoken on their fears of big government, big corporations and big banks.  In 1816 Jefferson wrote "...I sincerely believe, with you [John Taylor], that the banking establishments are more dangerous than standing armies; and that the principle of spending money to be paid posterity, under the name of funding, is but swindling futurity on a large scale."

I had yesterday off and after taking my sweet time around the house in the morning and afternoon, the babe and I headed down to Wall Street.  After taking random side streets to avoid the people I exited the subway with, (I was slightly embarrassed from falling UP the stairs, carrying a sleeping baby and landing on my back with my skirt not where it should have been) I saw the barricades and heard the drums.  We got there just in time to see the start of a line of people marching down the street carrying signs, playing drums and chanting.  Some signs were relevant and some not so much.  Then we found Zuccotti Park.  My nose was welcomed with the smell of Nag Champa, my ears were welcomed with the sounds of a drum circle and my eyes were welcomed with color!

Sure, there was a LARGE mix of people camping in the park.  There were homeless people that were happy to finally have company, families teaching their children about Freedom of Speech, drifters glad to be a part of something, older men and women reliving the protests of their youth trying to fit into the same clothes they wore then, young women taking advantage of the topless laws walking around topless, people clearly on drugs, drunks, men and women wearing warrior paint on their bodies, women nude covered in body "spray" paint, college kids, "prep" kids, working men - in suits and ties, average people that are angry and hopeful, people really serious about making a difference.  Through all the crazies that were there, there were pockets of people that were sober, fully dressed, working hard.  Working hard to be legit. 2 legit. 2 legit 2 quit.

It is a real operational camp.  There is a kitchen.  Restaurants and people are donating food and money- there is a compost bin, recyling stations, water filtration stations, volunteer sign-up booths. I felt excitment.  I was happy to be there. I was happy to get to see some action. I am glad that this is happening.  I was impressed.  There is a lot of good going on, and I HOPE that it doesn't dissapear.  I will be back.

With all that is happening, several people (at least 7) said to me as they pointed to my son a variation of "We are here for him."  I would be lying if it didn't choke me up a little. Thank you to eveyone who is Occupying Wall Street for the right reasons.

This is often mis-quoted giving credit to Gandhi: 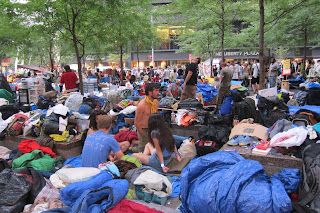 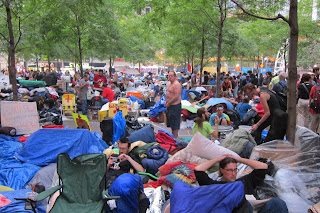 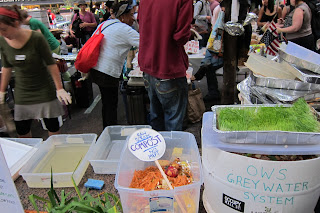 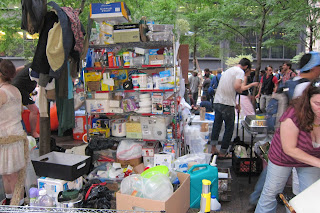 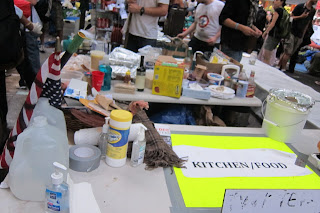 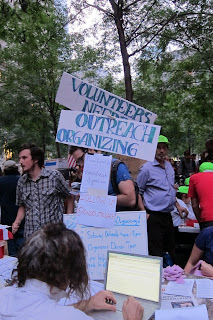