Time just goes and goes and goes and then it's gone. I picture a clock with it's hands going around so fast that you can't even see them. Yep, that's how I feel. It slows down a tiny bit after midnight, slow enough that I can do some things but still fast enough that before I know it it is 3am. Back when I wasn't on maternity leave, josh would often come to bed around 3 and I couldn't imagine what could still be going on after 1. Now I get it. Things. There are always things to do. Relax is one of those things. I like to relax. I'm relaxing right now. So relaxed I don't even feel like posting all the pictures I intended on posting from Christmas to now.
The last month in brief:
I have so many pictures to post! I'll do that this week sometime. Here is a family portrait in the meantime. 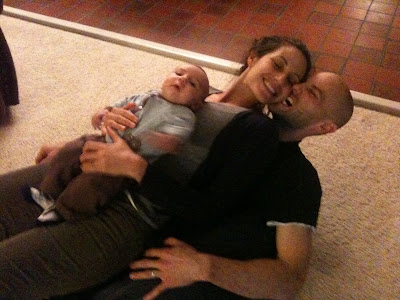