If you know me, you know that one of the few things in life that I REALLY want is serve on a jury. Maybe not even serve, but at least be called and go thru the process. I think it is a great constitutional right and civil liberty that was given to US citizens in Article Three of the United States Constitution.

Surely we get to vote and mostly have the freedom of speech and exercise our constitutional rights that way, but I think that serving on a jury is the one of the ultimate American things to do.

I have no idea why I have romanticized it as such, but I have. When I lived in Florida I was called twice. TWICE! and both times when you call in the morning of, i was told i wasn't needed. That was sad.

Then a few months back, I opened the mail box and saw the County Clerk's seal and the words "Important: Jury Summons Enclosed" highlighted in red - i was so excited. Until, i read further down the envelope and saw it was addressed to Josh Maready. Josh?!?! Josh, doesn't want to serve on a jury (well maybe he does, but is a hassle for him being free lance and all). I want to serve on a jury.

Well Friday it came. I opened my mailbox and there it was. Such joy has only been recorded on A Christmas Story when Ralphie gets that last box hidden behind the desk and finds his long awaited Red Ryder Rifle. That's what it felt like for 30 seconds. Then I saw the date October 25, 2010. 6 days after my expected baby's delivery date. Yep. so guess who can't go to jury duty? Yep. me. i think i just shot my eye out. this just may be the first of many sabotages this kid does. 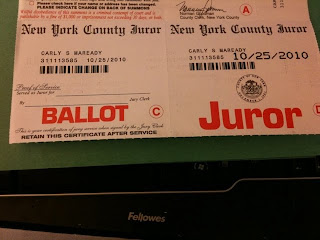