A Mouse in the House

Three posts on one day! You would think I have had an easy day at work. Au contraire! I have been quite busy. I just had two of these already written.


Ok. So, last night josh had to go into the closet in the back room to look for something and he came out and said “there was a mouse on one of your dresses, he was just clinging to it, like he was scared. I’m going to go back in a bit and it if is still there, I’ll catch it and put it outside.” He didn’t see it again. I went into the closet, took out my suitcase and started getting clothes together. Later, josh came in and said “Oh, look you can see the mouses tail.” It was hanging out of the leg of a pair of my pants. We thought we would catch it and then take it outside and let it go. I’m not opposed to traps, but I don’t want to see it actually die or manually kill it so we thought we would free it. Well… turns out the poor little guys foot was ll sorts of tangled in the loose thread/hem of my pants and he was stuck!

He could have been there for ages! Can you imagine if I would have pulled my pants on and felt a mouse?? Worse yet- as josh pointed out, what if I put them on and the mouse was dead! GROSS.

Josh took some scissors and cut the thread and the mouse fell into the pot we were holding out. This poor mouse had been through so much. He was missing an ear, skinny and clearly scared out of his mind. AND his foot was still caught up in the thread. We couldn’t let his leg fall off, or let him starve to death. Josh got his flashlight and tweezers and we carefully chased the mouse around the pot until we (josh) was able to loosen the thread and set his handicapped leg free. Then we fed him some snacks and gave him some water in the lid of an old water bottle. I could tell he felt better after eating and drinking. We let him rest for an hour and then josh took out side and let him go. He will probably end up back in my closet.  Traps will be set this time though. 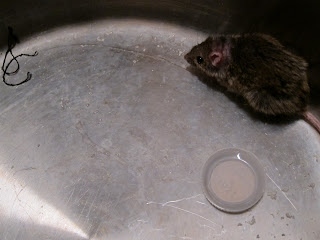