Coming back from Long Island errands Saturday night, we were informed by the Throgs Neck Bridge Toll Booth Lady that Whitney Houston had died.  As she handed Josh a receipt, she said "Did you hear about Whitney Houston?" after saying no and shaking our heads, she said "She died!" and then we drove off.  I was keeping the boy entertained in the back seat the rest of the way home, so I didn't think about the news that much. When I got home and settled, I started thinking about Whitney and her place in my life.

When Michael Jackson died, I was indifferent.  I think I was a tad too young to really appreciate the height of his career.  I had the BAD cassette and listened to it on occasion but to me he was just a weird guy who was incredibly talented and wounded.  Whitney's death is a little different.

Her death has not personally effected me, and my heart and prayers go out to her family and friends who may be sad and grieving at this time. Her death has made me look back on my life as a little girl and realize that her voice will forever be part of the sound track of my life.

Whitney Houston was BIG in the 80's. She was beautiful, talented, could dance and HAD CURLY HAIR!  I loved her.  I loved wearing leggings with leg warmers and a headband in my hair and dancing around the living room to her voice.  Those days in my living room, I was this: 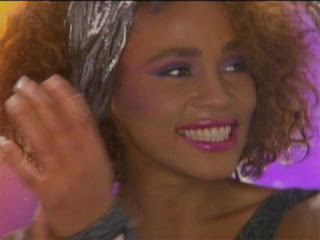 When I was 11 and more mature, the Bodyguard movie came out and I had to watch it. I loved it. I was a member of BMG (12 tapes/cd's for $0.1) and bought the soundtrack on cassette as soon as possible. I would listen to the tape front and back and then rewind it and listen again. When I was feeling sad from a playground break-up, I would play I Will Always Love You and cry.  I remember the tape and the cracks the case had from taking it everywhere with me.

When her personal affairs and problems were made public and her private battles were national news, I felt bad for her. My days of singing and dancing to her were long gone (unless driving in the car when a song of hers would come on), but I still felt bad for her and wished she would recover.

So when I heard she had passed away, I reflected on my childhood and smiled thanking her for the countless hours of song and dance and for being a part of my life.