1) I have been doing a photo challenge on Instagram where you post a photo a day. I started it in January and on the blog where this originated, it said to tag it #janphotoaday... So for all my January postings, I did this thinking her name was Jan. It wasn't until the February challenge was published and it said to tag them #febphotoaday that I realized this wasn't the case.


2)  Every Saturday morning Josh makes us pancakes for breakfast.  Sometimes they take a lot of time so he decided he would make HUGE ones that fill up the whole pan.  He said they were "Man Cakes".  I said "OH! you should call them...PAN CAKES!" As soon as it left my mouth, I shook my head. 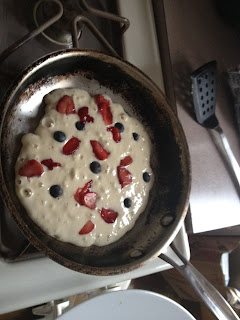 3)  We were at Ikea yesterday and as we were leaving Josh went and bought us one of the $1 ice-cream cones.  I had it in my hand as I was getting my coat on.  I looked down at my left hand and saw my arm was already through my coat sleeve AND that I was holding the ice-cream cone in that same hand. Time stood still for a second, and I thought I was definitely magical for putting my coat sleeve on while holding an ice-cream without messing either up! But then, I realized I must have just switched hands. DOH!
Posted by Ylrac at 1:18 AM