22 Months - Can't Get Much Better Than This. 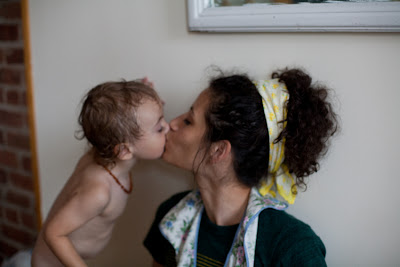 I haven't done a proper Sonny update in a while. I don't keep a journal or a baby book and I know when I am old and/or he is old he will want to know some of this stuff at least his life partner or kids would. You can stop reading here if you don't want to read a laundry list of his newest accomplishments.

I was just home visiting my parents and came across a lot of my old things, it's nice to have the memories and my mom is always telling me what I said or did as a kid - I like hearing the stories.   For instance, my parents would always ask me if I wanted to something to drink- then when they would ask me what I wanted to drink i would say "something to drink" because that's what I thought it was called.

He is growing up so so fast and I know I will forget all of this stuff.  Even though he is growing so fast, just tonight as I was laying in bed with him until he fell asleep, he said "mama's hand"' and reached for my hand and just wanted to hold it until he slept. I will let him do that forever.

At 22 months, he is still non stop.  Jumping, climbing, running, galloping like a horse, scooting, twiring, spinning, jumping, jumping and jumping. He jumps off of everything- stairs, chairs, tables, sofa, pool (ONLY if we are there to catch him of course), curbs - really anything he can jump off of he does.  And Hangs!  He loves to hang from anything - scaffolding, counters, rails, bars, anything with a lip or ledge he will try to hang from. And when he is hanging he is most definitely swinging.

He says hi and bye and good morning to most anything he sees.  Some favorites from our Florida vacation: "Hi Sunshine" "Good Morning Beach" "Hi Pool"  "Hi Car"  "Bye house" "Bye Beach"  "Hi Duke (parents dog)" "Good Morning chair" "Bye Ferbie (other dog)" "Good Morning Iguana (lizards on the sidewalk).  Pretty much anything he sees he will either greet or say bye to - he is just a nice little man.   He calls my Dad, Bapa and my Mom Gama and I hope that is what he calls them forever.

He talks A LOT.  His sentences are short about three words, but puts those three words with another two or three and will point to things he can't express.  You can almost have a full conversation with him, what he doesn't know he will ask, and he can get his point across to you of his needs and wants really easily (makes life so much easier).  He will tell me what he wants for breakfast - ranging from oatmeal, eggs, waffles, pancakes or cereal and when he says it - that IS what he wants.  He has a one track mind.  When he wants one of us he says pretty loudly "Coooooooomme heeeeeeeeeeeeeeeeeeeeeeeeeeeeerrrreeeeeee  Peeeeeeeeeeassssssssseeeeee!" I love it.   He is very good with please and thank you and 75% of the time we don't need to remind him to say either. He says "wook" for look and "ginnky" for stinky. 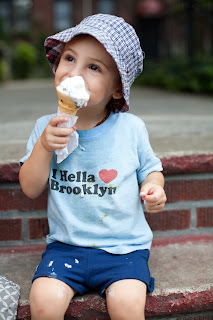 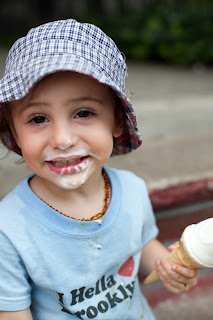 He can identify and call out circles, squares, triangles, hearts and stars and likes to say the word octagon.

His favorite songs to sing are "Enjoy the Silence" by Depeche Mode, "Day 'N' Night" by Kid Cudi, "Carmenista" by Devendra Banhart (this is his dance party song), "Young Folks" by Peter Bjorn and John, "Come, Thou Fount", "Now the Day is Over", "I Need Thee Every Hour" By the Mormon Tabernacle Choir,  "It's Time to Go to Bed" by Fancy Nancy and any rendition of B-I-N-G-O he can find on YouTube.

We don't watch much TV, but we will tune into Wipe Out if it's on while we are eating dinner.  He'll watch it closely and when someone falls, he'll say "Oops, he missed" and smile.

Sometimes, if he is in the right mood he will stop all activity and ask to sit by the window and watch what is happening five floors below. 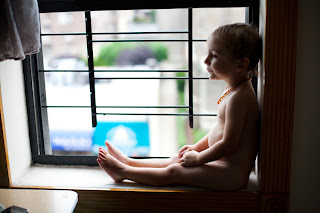 There are so many other little things he does and silly things he picks up along the way, that make me laugh and smile every day. We are so lucky to have such amazing people in his life, that have helped us raise him to be who is already.  To our families, friends and most importantly his sitters - THANK YOU.  He is who he is - 100% delightful - because of your influence. We are very very lucky. 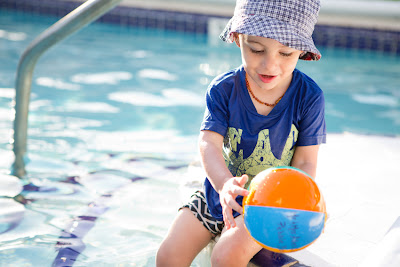